10 Lessons from 10 Years of Ministry 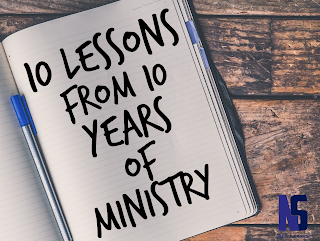 Two weeks ago I reflected on ten years of marriage with my incredible wife. What many folks do not know is what happened the week after our wedding day. After a brief honeymoon in the Blue Ridge Parkway, Anna and I loaded up our Chrysler Concorde (aka. “The boat”) with all our possessions and moved to Salem, Indiana. In December of 2009, at the ripe age of twenty-one, I began my first full-time pastorate.

I have learned a lot of lessons about ministry in the last ten years. Many of those lessons were learned through mistakes or winging it. Church ministry, like many professions, is a series of on-the-job-training experiences. You learn as you go! And I still have a lot to learn.

I will be forever grateful for other pastors who have taught me lessons along the way. What follows is a list of pastors and lessons I’ve learned from them over the years. There are many more men and women I could have mentioned; yet for the sake of brevity here are the top ten:

Mark was my pastor for five highly formative years of my life during graduate school. For nearly three of those years I had the privilege of working with him on staff. Mark has been a pastor there for over a quarter of a century.

Terms like dependability, faithfulness, trustworthy, selflessness, and integrity come to mind when I think of him. I’ve never seen Mark overreact. I’ve never observed him worry visibly about church finances. I never heard him raise his voice. He is rarely in a hurry and doesn’t make decisions out of fear or hype. Great pastors are steady plodders who stay the course and remain faithful to Jesus and their congregation in the daily grind.

#2: Shooting the breeze with people isn’t a waste of time. It’s actually the best use of your time. (George)

Most of my meetings with George have started with a long banter about “stuff” going on in one’s personal life. We talk about family, weekend plans, books we’re reading, and personal things. He often gets stuck in the hallway shooting the breeze with people. People come before tasks with George.

I’ve learned from George that shooting the breeze isn’t a waste of time; it’s the best use of my time. That is how we develop trust and build relationships. And if you don’t spend time getting to know people on a personal level, you will be ineffective in working with or leading them. Plus, people are really interesting!

#3: Evangelism happens best when we go and serve rather than merely inviting people to church. (Phil)

This is probably a no-brainer for you. But is was not for me. I grew up in Baptist circles, and evangelism was typically associated with inviting people to church or a program at the church building. Christians were encouraged to live godly, evangelistic lives beyond the walls of the church, but organizing an evangestic effort was always centered around the church building.

Dr. Phil was my mentor for two semesters of graduate school. During one of our meetings I was picking his brain on evangelism and how to organize and equip our church to do it. He told me: “There are two basic ways of doing that - inviting people to an event, or going out and serving the community.” Sounds crazy, I know, but I hadn’t really thought of that before. I could organize a church-wide effort, beyond the walls of the church building, and it could serve an evangelistic purpose?

A few months later, our church cancelled an annual event that brought in a couple hundred people, and instead we sent dozens of volunteers to the school next door. The school was hosting a fundraiser and they gladly allowed our church to run concessions. Several hundred people passed through concessions and saw an army of volunteers wearing church T-shirts, and they ate and talked with us. It was fun, way easier than running our own event, and I believe more effective at showing the community that our church cared.

#4: Be aware of church politics; but don’t play the political game. (Ray)

Just like any workplace or organization, that we have to maneuver politics. There are hidden rules, power players, and unspoken expectations. The same is true in churches. In most churches, the little old lady who sits in the back holds more influence than the elder board and staff combined. It’s her words, her connections, and her history that carry weight.

Ray has helped me see many times over that it’s foolish for pastors to operate as though church politics aren’t at play. However, playing the politics game is counterproductive. I’m not a mafia boss; I’m a servant of Jesus Christ and an equipper of his church.

Doug was my youth pastor from seventh grade to graduation. I observed him like a hawk, asked him endless difficult theology questions, and spent countless hours with the man. He and his family built a foundation in me to follow Jesus, love my wife, raise a family, and pastor God's church.

Doug has been a reference for me a few times while candidating for a pastorate. He has shown me many times that church work is not a series of career steps or a process of building a resume. It is a calling.

Roger is the most hard-working man I know. And he’s my father-in-law, so I know him pretty well! Despite his intense work ethic, he has taught me a valuable lesson over the years: it’s OK to rest.

Pastoring is a job about relationships. And people frequently need you. In my first years of ministry, I was discouraged with how many people were having issues and the urgency they displayed. I learned from Roger that I cannot help someone fix an issue within a day that has taken them five years to create. Most “urgent” needs can wait. It’s important to maintain time with my family, time to take care of myself, and time to rest.

Larry is one of the most initiative ministry leaders I’ve ever met. He shoots straight and speaks candidly. I hitched a ride with him during a seminar and was fascinated at some of his stories.

Like many leaders, I get good ideas all the time. Only a small percentage of them actually end up being good… And most of them need to be forgotten! When launching a new idea, there are two approaches: One, you can map out a flawless strategy, pitch a three year plan, and announce a new way of doing ministry. Or you can take the easy approach; just try it! Announce that you’re trying something for two months or so. Most people will go along with a trial run without fussing. If it works, walla, you launched your idea. If it flops, say “We tried it, back to the original way!” and nobody minds.

Mike is an enthusiastic, innovative, entrepreneurial pastor. During the few interactions I’ve had with him I always learn something. The greatest lesson I learned from him occurred late one evening in Wyoming.

He was asking about my church and how I was trying to shepherd the people who were coming. A family was skipping mid-week programming to attend one of their son’s sports practices. I was bemoaning their lack of commitment and asking Mike for advice. To my surprise he said “I can see why you’re concerned. But I see that a little differently. I’m happy they are spending time together as a family and are out in the community.”

I had never thought of it that way. Don’t get me wrong, there is nothing godly about being so busy that you rarely have time to attend worship services or invest in your church family. But there’s also nothing praiseworthy about being so busy with church programming that you rarely have family time or you are unable to be involved with the unchurched in your community.

#9: Trust is gained over years of small things. (Max)

Max was my pastor from boyhood through college. I didn’t have a whole lot of interaction with him, but I observed him from a distance. And everyone at the church - staff and attender alike - spoke very highly of him. In fact, the folks of PBC would have followed that man down into the valley of the shadow of death if that’s where he said they needed to go.

Through decades of faithfulness in the small, mundane things, Max earned the trust of his congregation. People didn’t love him because he could preach, pray, or lead; they loved him because he was a man of integrity. A man who cared about them and held their best interests in mind.

I forgot who taught me this, but it definitely makes the top ten: transitions happen.

There are few things more discouraging in ministry than seeing someone you depended on or someone you personally discipled walk away from your church. Especially if they left because they were upset about something. Pastors take that very personally. When this happens it has been so helpful to remember that everyone leaves at some point. People pass away, people move, and some feel it is right for them to just leave. No matter what caused them to leave, it was bound to happen at some point, for some reason. Instead of lingering in discouragement, focus on the new folks coming in.
Posted by Nik
Email ThisBlogThis!Share to TwitterShare to FacebookShare to Pinterest
Labels: Church Leadership, Leadership, Ministry, Most Popular Posts, Pastor, Spiritual Leadership