Is it wrong for a Christian to fear? 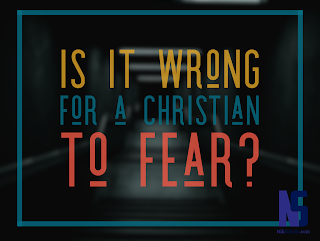 We are living in scary times. And for Christians, we sometimes feel guilty for experiencing fear. Isn’t it sinful for us to be scared? Didn’t Jesus rebuke his disciples for being fearful and having too little faith? If I’m a Christian, am I supposed to be calm in the midst of all storms?

But I really want my readers to consider what all this means. I am convinced that we SHOULD be scared in times like these. But there are two ways we should think about this fear:

To be a Christian is to be a person who lives in fear. Jesus, without mixing words, advised us to “fear him who can destroy both soul and body” in reference to God the Father (Matt. 10:28). And even though the word “fear” might turn some away, I think that’s a good word to use. At Mount Sinai when God showed up to meet with Moses the entire mountain was engulfed in smoke, and the sound of thunder was overwhelming. We are told “all the people in the camp trembled” (Ex. 19:16). After Jesus calmed the stormy seas, the disciples were “filled with great fear.” Make sure you don’t miss this: they were petrified OF Jesus AFTER the storm was calmed.


In the original Hebrew and Greek, the terms translated “fear” mean something along the lines of wet your pants, run for the hills, and cry Momma. Many have argued that the fear of God is simply a reverential awe of God. However, defining fear in those terms is too benign. This is genuine fear we are talking about! The fear of God drives us to piety, reminds us of our place, and forces us to recognize God’s sovereignty.

The key is to fear God more than fearing other people. Or nature. Or Satan. Or circumstances. Keep in mind fearing God doesn’t necessitate us NOT fearing these other things. It means that we have full faith and confidence that the lion standing behind us is way more powerful than the barking dog in front of us. After all, “greater is he who is in us than He that is in the world” (1 Jn. 4:4).

(2) Act on your greatest fear

As Christians we are called to act on this fear of God. I may be petrified of what is to come, but if my fear of God is greater than all my other fears I know intellectually that God is stronger, smarter, and scarier. God is more powerful than a job loss, or an emergency surgery, or spiritual attack, or being deported in war, or a recession, or a life-threatening virus.

I act on this fear of God by stepping into the danger rather than running away. A police officer can charge into a room of convicts with confidence AND fear, because he knows the pistol in his hand, the training in his head, and men behind him, and the chopper in the air above him is to be feared more than those convicts.

If you are scared right now because this pandemic is claiming lives, crashing stock markets, upending the economy, and forcing isolation, I want you to know you are in good company. You should be scared. If you are not worried at all right now, then you lack good self-awareness and empathy skills. (You should go see a psychiatrist.)

But here’s what it means to be fearful of life circumstances while simultaneously fearing God. Act on your fear of God while facing your fear of everything else. If God prompts you to make sacrifices, or help out a neighbor, or make decisions, or reach out to someone, or take a risk, then do it.

The disciples were likely scared when Jesus said “let’s go talk to that deranged lunatic in the forest” (Mark 5). The Israelites were probably petrified when Moses said “let’s run that way into the sea” (Ex. 14). Peter was probably worried when Jesus said that he would not die from natural causes (John 21:18-19). It’s not bad to be fearful. It’s only bad to fear other people or things more than God. And if you’re not there yet, join in with the man who told Jesus, “Lord I believe, help my unbelief” (Mark 9:24).
Posted by Nik
Email ThisBlogThis!Share to TwitterShare to FacebookShare to Pinterest
Labels: Biblical Theology, Christian Living, Fear, Most Popular Posts, Questions People Have