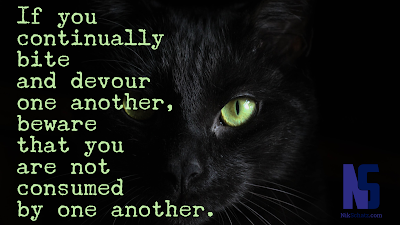 There’s a lot to fight about these days. Mask-wearing, the economy, the presidential election, racial protests, recent Supreme Court decisions, religious freedom – all points of disagreement right now. It feels like all of us have been thrown into a giant crockpot, with these ingredients of contention piled on top. Toss in a dash of social media, a pinch of self-quarantine, two teaspoons of recession and a quarter cup of working from home. This soup is going to be awful!

More than ever before, the people within our churches are at odds with one another. Good Christian folks who, just a few months ago, saw eye-to-eye on most things. But now they are strongly opposed to one another.

For most of us, dealing with conflict in a healthy way is not natural. We haven’t seen it modeled well. But you know what is natural for most of us?

Eating people. Instead of handling our conflict healthily, we are eating each other.

Knowing the world is filled with cannibals, the Apostle Paul wrote this:

… if you continually bite and devour one another, beware that you are not consumed by one another. (Galatians 5:15, NET)

Sarcasm, passive-aggressive statements, social media rants, replaying conversations in our head… this is how we devour people. Somebody always walks away with bite marks up and down their arm. But this behavior is also unhealthy for the “consumer.” Whenever we gobble up people we disagree with, we are unintentionally proving that we do not value them or their ideas. Eventually we end up surrounded by people who think just like us. That’s a dangerously ignorant place to be.

Thankfully the same writer who warned us about biting and devouring each other also offered us some better advice:

…with all humility and gentleness, with patience, putting up with one another in love,
making every effort to keep the unity of the Spirit in the bond of peace. (Ephesians 4:2–3, NET)

A part of me wishes I had never come across those two verses. Because now I’m accountable to follow them! I’m called to put up with people. I’m called to make “every effort” to maintain unity with my brothers and sisters in Christ. That is a high bar! To be honest, I’m not sure I’ve ever fulfilled that command. Can you think of a time when you made “every effort to keep the unity of the Spirit” between yourself and someone you disagree with strongly?

When conflict arises, we have two options: we can eat people we disagree with, or we can make every effort to maintain unity. Imagine a world where the followers of Jesus are known to be people who are ferocious about unity amongst themselves. They have different opinions, they disagree with each other on various issues, and they have controversial conversations, but they always leave one another with a smile and a wave, still friends. Imagine a world in which the people of God are known as a people who refuse to eat each other, and instead insist on making every effort to maintain unity.

I’m determined to be that kind of person. I hope you’ll join me.
Posted by Nik
Email ThisBlogThis!Share to TwitterShare to FacebookShare to Pinterest
Labels: Christian Living, Culture, Ministry, Unity