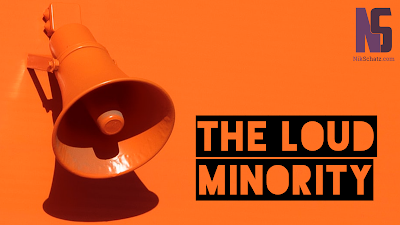 What is the Loud Minority? It’s that small cohort of people in your church that becomes entangled and enraged about something that doesn’t really matter. But to them, that something matters a whole lot.

The Loud Minority is well-intentioned. They have a good heart. They want to see the church do the right thing. But they have become distracted from the mission, and instead have latched their attention on a minor issue.

Every church has a Loud Minority. And they can become instantly enthralled in the most random of issues: church aesthetics, minor doctrines, mask-wearing, politics, personnel changes, small funds, or programs that died off years ago. And the worst part is that fixing their issue doesn’t solve anything, because they always find another minor thing to be upset about!

The Apostle Paul dealt with the Loud Minority too. And most likely, the problems you are dealing with can’t even shake a stick at the pettiness he put up with. Just read his letters; he was constantly dealing with the most petty, unimportant things.

People who were enraged that new Christ-followers weren’t being circumcised (Acts 15:1-5).
People who were offended when others ate the wrong kind of meat (Romans 14:2-3).
People who refused to share a room with persons of another culture (Galatians 2:11-14).
People disputing that women who took off their head coverings during worship were arousing (1 Corinthians 11:13-16).
People who thought the pastor shouldn’t be compensated for gospel work (1 Corinthians 9:3-12).

Oh, and let’s not forget the most awkward HR conversation in all of church history. Imagine the day Paul sat down with his pastoral protege, Timothy, and asked him to be circumcised so he wouldn’t offend the Loud Minority (Acts 16:3).

We can learn some lessons about how to deal with the Loud Minority from Paul’s career. He warns us to be discerning enough to recognize whether a complaint is important or just the barking of “dogs” (Philippians 2:3). He urges us leaders to be patient with them (1 Thessalonians 5:14), “putting up” with them while “making every effort to keep the unity of the Spirit in the bond of peace” (Ephesians 4:2-3). He instructs us to walk in love, going out of our way to avoid offending someone’s personal conscience (Romans 14:15-21).

But he also tells us this: never allow the Loud Minority to distract you from the mission. The Loud Minority “has an unhealthy interest in controversies and verbal disputes,” and we are instructed to “keep away from all that.” (1 Timothy 6:4,11)

“But reject foolish and ignorant controversies, because you know they breed infighting. And the Lord’s slave must not engage in heated disputes but be kind toward all, an apt teacher, patient, correcting opponents with gentleness. Perhaps God will grant them repentance and then knowledge of the truth and they will come to their senses and escape the devil’s trap where they are held captive to do his will.” (2 Timothy 2:23–26, NET)