You Are Not Dismissed 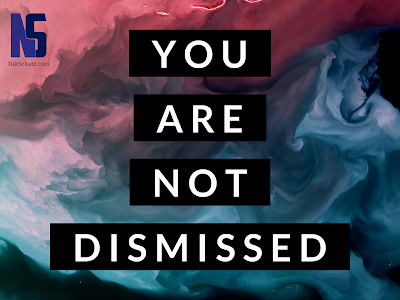 I once heard a pastor compare the local church to a local gang. No gang member ever says “Are you going to gang tonight?” Or “What time is gang this Sunday?” You don’t go to gang. You don’t attend gang. You don’t leave gang. You are gang.

Likewise, our culture often describes the local church as a building, a place, a service, or an event that has a start time and an end time, it has walls and boundaries, and it’s a noun rather than a verb. But the story of Christianity tells a different story. The church is a called out assembly of God, sent into the world to spread the gospel and bring about the kingdom of God.

What does it mean to be “sent?”

What did Jesus mean when he said that he was “sent by God” and that he would be “sending” his followers? Where are we “sent” to and what are we supposed to be doing? Those are the questions I hope to answer for you.

In this article you will learn that the Christian faith includes a rich history of people who were sent by God. And if you are a follower of Jesus, you too have been sent.

Jesus, the sent one

Let’s start at the source; the one who sent us, Jesus Christ. I want us to look at a famous prayer that Jesus prayed in John 17. Some people call this the “high priestly prayer” because Jesus prayed this on behalf of his disciples and all future disciples.

The first place we see this happening is in the incarnation. He emptied himself of deity and took on human likeness. He became human. He clothed himself with a human body, ate human food, wore human clothes, walked a human earth, slept in a human house, and he walked around with humans on this miniscule little rock floating around in the universe. He became like us.

But you can’t miss this – he was just like us, yet at the same time he was nothing like us. People are selfish and self-consumed; he was selfless. People think about what they can get; he thought about what he could give. People want to be served; he wanted to serve. People want to become rich; he wanted to become poor so others could be made rich. While he became like us, he remained nothing like us.

He was like people, yet unlike people, and always engaged with people. He spent time with tax collectors, prostitutes, womanizers, criminals, and sinners. He also spent time with priests, scribes, and prophets. He was sent to those on either end of the spectrum, the religious and the irreligious. Andy Stanley puts it this way: “People who were nothing like him liked him. And Jesus liked people who were nothing like him.”[1]

The Apostles: the “sent ones”

As Jesus worked out his ministry, he attracted followers or disciples. Lots of them. Those disciples were family members, people he met fishing, people he met in small villages, and even one guy he met while paying taxes. They were attracted to him because he was just like them. Yet he was nothing like them and he always engaged them.

One day he gathered his closest twelve disciples and renamed them “apostles.”

And when day came, he called his disciples and chose from them twelve, whom he named apostles. (Luke 6:13 ESV)

The word “apostle” literally means “sent one.”[3] Jesus was also called an apostle, or a “sent one” (See Hebrews 3:1). Jesus was making a statement when he to gathered his closest disciples and rename them “apostles.” He wasn’t giving them a title; he was giving them an action. He gathered them and said “I know you are my followers because you follow me. But from here on out, I’m calling you my ‘sent ones’ because I will be sending you out to fulfill my mission.” This wasn’t just a title, it was an action!

This brings me to an important word you should know. There’s a word in the original language of the Bible pronounced “oikos.” It literally means house or household, but that’s too narrow of a translation. A better way of understanding this word oikos is as “Natural networks.”[4]

As you read through the New Testament, you’ll see people bringing the gospel message of Jesus to members of their household, or oikos. They start house churches, called an oikos. But an oikos was understood to be more than just my immediate family. An oikos was my family, my extended family, my farm, my neighbors, those I work with, and my local community or village. In other words, my oikos is those who are in my immediate spheres of influence. It’s the people I interact with all the time, most specifically my household and close friends.[5] The church spread rapidly through these natural networks.[6]

While the church grew in this oikos movement, it was also clear that these early followers of Jesus were nothing like those right around them. We see Christians called all kinds of “unlike” names.[7] Names like strangers, aliens, foreigners, temporary residents, citizens of heaven, refugees, and Christians (or little-Christs).

In essence, these first followers were really different. They were called “people of the way” (Acts 19:23). Common people didn’t know how to talk about this new religion. There’s no sacred temple and there are no god-idols to look at or touch. It’s not all about the rituals, it’s a way of life, so I guess we’ll call them ‘people of the way.’ These people are just like us – they dress like us, shop with us, work with us – but they’re nothing like us!

These first followers were just like other people, but they were so unlike other people, and always engaged with other people. They saw themselves as sent to their homes, their villages, their farms, their markets, and their communities. And the way they lived was so different, so attractive, that it baffled people.

Here’s what two historians write:
The apostles and those who worked with them were ordinary men and women. But what set them apart is that they knew they had been sent by Jesus back into their communities and the world. They were just like everyone else, but unlike anyone else, and always engaged with those around them.

The Early Church: A Sent People

Now as we move through history beyond the letters of the Bible, beyond the lifetimes of the apostles, we get to the early church. We will see more and more ordinary men and women just like you and me who viewed themselves as sent by God.

These Christians were just like everyone around them. They weren’t qualified. They weren’t theologically trained. They weren’t paid church staff, missionaries, or evangelists traveling church to church collecting love offerings. They were everyday people.

As you read church history, you’ll discover that people from all walks of life – everyday Christians like you and me – were missionaries, or sent people. Carpenters, merchants, soldiers, captives, slaves, jailors, rulers, day laborers, family members, leather workers, farmers, builders, doctors, wool workers, bakers, professors, housewives, city employees, government officials, leather workers, beggars, and wealthy upperclass people. One author puts it this way: “Everywhere they went, they took their religion with them.”[10] They were a sent people.

While these early church people were just like those around them in their profession and where they lived, they also proved to be nothing like them. You have to realize that Christianity wasn’t a big deal in this era. This wasn’t a large, organized religion. The society around them didn’t understand Christianity, and they weren’t the majority religion like certain parts of the world today.[11]

One apologist puts it this way: “Among us you will find uneducated persons... who, if they are unable in words to prove the benefit of our doctrine, yet by their deeds exhibit the benefit arising from their persuasion of its truth. They do not practice speeches, but exhibit good works; when struck they do not strike again; when robbed they do not go to law; they give to those that ask of them, and they love their neighbors as themselves.”[12]

The question was What is wrong with these people? They’re just like us, but they’re nothing like us!

While like and unlike, the early church was engaged with everyone in their spheres of influence. They used their homes night after night to build bridges, form relationships, and talk about Jesus. They entertained guests, hosted meetings in their home, and showed hospitality.[13] They formed deep relationships while working alongside others in the fields. They were sent to marketstalls, wineshops, laundrymats, the public house (i.e. the modern-day bar).

Everywhere these people went, they were on mission. They were a sent people: Sent to be like, unlike, and engaged with others.

The Church Today: A Sent People

I could go on forever talking about God’s sent people throughout history. Monks and nuns who educated entire towns. People who traveled to tiny villages with medicine and a gospel message. People who sold all their possessions to give to the poor. People who left their jobs to start orphanages. Ordinary Christians who lived out the gospel in politics, art, family, schools, and business.

Jesus is sending you to the people you already know. Go be with those who are just like you.

As you do this, you will find yourself shockingly unlike anyone else around you.[14]

Just to be clear, engagement with the community around does not mean Jesus is calling you to fight for your rights. Or saturate your conversations and media posts with your opinions. Or be a jerk and a bible-thumper about your faith. Or to be weird as you talk about your faith.

To engage those around you is to live out the gospel. It means to live at the intersection of heaven and earth, or a concept Jesus called the “Kingdom of God.” You are sent to live out the values of God’s kingdom.

[5] Rodney Stark, The Triumph of Christianity: How the Jesus Movement Became the World’s Largest Religion (New York: Harper One, 2011), 69.

[6] Arn and Arn, The Master’s Plan for Making Disciples, 58 The author calls an Oikos a “natural network.”

[9] Kenneth Scott Latourette, A History of the Expansion of Christianity, 1:85. Quoted in Terry, 31.

[13] Nice quote about Celsus: “Celsus complained of it: it was in private houses that the wool workers and cobblers, the laundry workers and the yokels whom he so profoundly despised did their proselytizing.” Green, Location 3605.

[14] Idea for these contrasts came from Keller, Center Church: Doing Balanced, Gospel-Centered Ministry in Your City, 283.