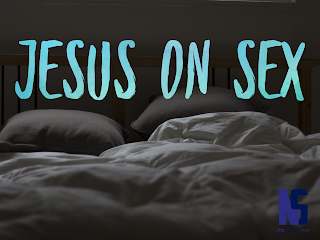 In Matthew 19, Jesus gives us the original design for romantic relationships. Christians worship the God who made all things – the universe and the earth we live and breathe on. All things he created were considered “good”. The only thing that was not called “good” was that the first created man was alone.[1] God created a partner for him and thereby laid out his design for romantic relationships.

God’s design calls for is Heterosexual, Monogamous, and a Covenant of oneness consummated and regularly celebrated in the act of Sex, lasting for a Lifetime.


Before reading too much further, be sure to read my first post in this series about Jesus on Sex. In that post I share several resources you can read for more information or personal growth.

God created mankind, and in doing so he created all the hardware and equipment that comes with our body. Sex is a good thing, a gift from God, and a useful gift when it comes to creating intimacy and children. He made us with sexual attraction.

Everything God created is good… when used in the way it was designed. Adam’s fists were made for good when he clenched farming equipment; those same hands were used for evil when clenching the forbidden fruit. Likewise, our sexual attraction can be used to pursue our spouse and be loved in return, or it can be used to pursue the wrong person. Lust isn’t sin, as long as it is lust for the right person.

This design reveals what we truly desire: intimacy.

All of us want to love and to be loved. Sex is enjoyable, but all of us want more than sex. We want true intimacy. As much as we like to talk about “no strings attached”, it’s the strings that make a sex meaningful, bonding, and long-lasting. As one sociologist puts it, “People assume that there are two very distinct elements in a relationship, one emotional and one sexual, and they pretend like there are clean lines between them.”[2] We are wired in such a way that our physical and emotional faculties are intertwined. Therefore, having sex without becoming emotionally attached is impossible and harmful.


Dr. Leslie Fisher writes about three brain systems for romance, all of which build upon one another into a more mature relationship.[3]

Right after Jesus lays out the original design for sex and romantic relationships, he speaks privately with his disciples about singleness. He states “there are eunuchs who were born that way, and there are eunuchs who have been made eunuchs by others—and there are those who choose to live like eunuchs for the sake of the kingdom of heaven. The one who can accept this should accept it.” (Matthew 19:11-12)

What is a eunuch? It’s a man who does not have the male sex organs. Jesus says there are three kinds of eunuchs:
Jesus realizes that singleness can be a lonely, exclusive lifestyle. That’s why he said not many can accept this calling. Yet he exemplifies this lifestyle as honorable – and the apostle Paul states this is best (1 Corinthians 7). There are certain opportunities that you have when you are single that you just don’t have when you are married or have a family.

You may be a single man or woman, whether never married or divorced, and you may be wondering if this is the life God has called you to live. Jesus never states that this needs to be a permanent calling – the God who calls you to singleness today may call you to pursuit marriage tomorrow. If you feel called to remain single for the sake of making disciples right now, begin making plans for how God can use your spare time, your spare money, and your flexible living and working situation to make the greatest impact on this earth.[4]


“I followed this design, but I’m not sexually fulfilled…”

In my next post I’ll be addressing those who have followed all the ‘rules’ for sex, yet they are not satisfied. Singles, marrieds, widow(er)s, and divorcees can suffer much disappointment in their sex life, especially when they are keeping with God’s design for romantic relationships. Next week I’ll share a bit of what Jesus says on this problem.