What Exactly is the Christian Hope? 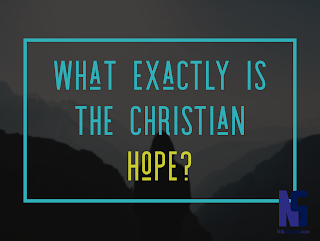 Those who follow Jesus are instructed to have hope. We are told that, unlike others who have not sworn allegiance to Jesus, we have “hope as an anchor for the soul” (Heb. 6:19). We are told that when we mourn, we may mourn with hope (1 Thess. 4:18). No matter what hardship befalls us in this life, we can still live in hope (1 Cor. 15:19, Rom. 8:24).
Hope is a good thing! But what exactly does it mean?

Unfortunately, none of that is promised. We are not guaranteed wealth, health, or prosperity. In fact, the guys who wrote those passages about hope in our New Testament had a pretty good feeling they would not be dying from natural causes.

In order to avoid being trite or shallow, I want to speak very clear about this hope that we have. If you follow Jesus, then you can have absolute hope in two things: (1) Hope in being resurrected, and (2) Hope in being glorified.

Hope in being resurrected

“But in fact, Christ has been raised from the dead. He is the first of a great harvest of all who have died.” (1 Corinthians 15:20, NLT)

Christ died. He was buried. It was over. But He did not stay dead, nor did he remain in that grave. The core belief of Christianity is that Jesus resurrected from the dead - literally, physically, bodily - as in it really happened. (Read more about that here.)

And Jesus’ resurrection was not a one-time phenomenon. 1 Corinthians 15:20 reads that Jesus was “the first of a great harvest” (or “first-fruits”) of resurrections.

Hope in being glorified

Jesus died and resurrected. Likewise we have hope that we will be resurrected after death.

But once Jesus was raised from the dead, He was glorified. This is the second part of our hope: We will be glorified.

This idea of “glory” can be misleading. Perhaps you think of shiny, glowing creatures. Or having superpowers, like flying or reading minds. That is definitely not what this writer has in mind!

Glory is significance. Authority. Weight. To have glory is to return to our purpose as humans - to lead this world on God’s behalf and rule with Jesus. (To hear a fascinating conversation about this word in the Bible, check out The Bible Project podcast)

In the original creation, Adam and Eve were given jurisdiction and authority to lead this world, protect this world, care for this world, and rule over creation on behalf of God. They were the image of His glory on this earth. Of course they messed that up… But one day God will restore this world, He will resurrect our bodies and restore us, and then we will be glorified with him.

So much more could be written on this concept of being glorified. My next article will deal with that very topic. Until then, be strong and love the Lord your God with all your heart, soul, and mind. Because one day you will be given a new body and the glory to lead creation with Jesus.

“We know that the one who raised the Lord Jesus from the dead will also raise us with Jesus and present us with you to himself… Therefore we do not lose heart. Though outwardly we are wasting away, yet inwardly we are being renewed day by day. For our light and momentary troubles are achieving for us an eternal glory that far outweighs them all. So we fix our eyes not on what is seen, but on what is unseen, since what is seen is temporary, but what is unseen is eternal.” (2 Corinthians 4:14–18, NIV)
Posted by Nik
Email ThisBlogThis!Share to TwitterShare to FacebookShare to Pinterest
Labels: Biblical Theology, Christian Living, Most Popular Posts, Questions People Have, Resurrection, Suffering, Theodicy